T2, where I remember

15 years ago this night, I was sitting on the floor of an apartment on the northside of Chicago staring at the television, feeling pretty numb inside. Take away the scenery, and most anyone my age or older could tell you nearly the same story. But, I was half way across the country from my home state. And my home state just went through the worst day of it's life. Proud of my downstate NY roots, proud of everything New York stands for -- the melting pot, the hard work, the loyalty to the ideals of this great nation, my heart was shattered watching what was once the twin towers, now, a massive graveyard and immense amount of smoke. It was utterly baffling. Like the worst movie I never even wanted to pay to see.
Starting at around 8:30 am, I entered into that movie - and started to watch a world I didn't even know could handle such horror and evil.
Anyway, at that time I was 21 years young and worked in the Conservation Department for the Baha'i House of Worship for North America - a literal symbol of unity and peace, that incidentally stood 19 stories tall, and was on the shore of lake Michigan, just a short ride up from downtown Chicago, where other way taller buildings like the Sears tower lived. My job that morning was to power wash the windows on T2. T2 refers to the second level. So I was on the first roof up of the building, harnessed in of course, and of course, the power washer was malfunctioning. Myself and my teammate for the morning called to our supervisors to advise of the issue and were told to hang there and wait. So I moved to the edge (who even was I at that age!), and sat down to wait. There was a great deal of construction going on at that time, as a major renovation was taking place to the grounds of the House of Worship. Picture me chilling on the roof, facing toward the start of the construction on the east side of the building. The construction foreman - who I consider a fabulous human, but who hails from the left coast and well, you know New Yorkers and our strong opinions... (eye roll here) - was walking below and starting waving his hands at me and then he yelled out " WE'RE IN BIG TROUBLE, PLANES FLEW INTO THE WORLD TRADE CENTER BUILDINGS AND NEW YORK IS TOTAL CHAOS".  I yelled back "STOP PLAYIN AROUND, THAT ISN'T ANY KIND OF FUNNY MAN". He stood and shook is head solemnly and said "IT'S REAL".  So then I'm pacing around the roof waiting for our supervisor to come and either make the power washer work or at least TELL ME THE DUDE WAS JOKING.  A few minutes later my supervisor arrived and informed the two of us power washing was not happening. He and I were needed to search the building (HOLD UP...WHAT??) and new plans would be made after.
Then he asked me to pick a direction and told me we had to search the edifice top to bottom to make sure nothing was out of place or odd. A precaution being taken at every major attraction in the country I understood. So I did, I looked at ladders and boxes and thought - that's where I tracked them over the summer, right? I climbed through the dome and out the pinnacle of the structure and looked and thought - that's just dust, right? I thought how crazy it must be to be some place that is even larger and have to evacuate - and I thought over and over and over how it was frustrating to not know what was going on - what I was searching for, what I was to be afraid, or not afraid of, what was happening to the world.
When we finished once-overing the whole place, I went back to the office building and into the security room - there on a 13 inch tv with poor reception I finally saw the buildings on fire, the chaos in the streets of lower Manhattan, the falling man, the loss of life, the horror.
I don't remember how long I sat in that office - I kind of remember being shooed out and back to work, but my memory glazes over and then sets me on that hardwood floor eight hours later, watching tv and thinking of any possibility anyone I knew was in the city that morning. In my case, the odds were slim. I believe it was two nights later, I called my college friends to check in from that same hardwood living room floor. During the day I spoke to my parents, I spoke to my family and I thought, we are so lucky - all of us, to just be bearing witness to this tragedy.
Now, 15 years later, we change facebook profile pics, I personally, watch endless hours of 9/11 documentaries and movies on the History channel, and I talk to my daughter who wasn't born yet about the fact that while terrorism is real, and we cannot forget that - we must remember the heroes who didn't hesitate and we must continue every day to believe in Unity, Love and our common decency and connectedness. 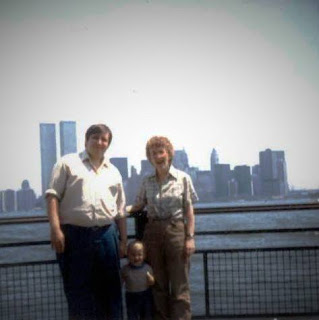 Yes, that's a tiny little aberator taking the ferry with her parents toward Manhattan. Yes, that's the skyline of New York the way I will always remember it. Always.
Posted by Unknown at 9:50 PM